Posted on October 14, 2022 by The Corporate Clash Crew 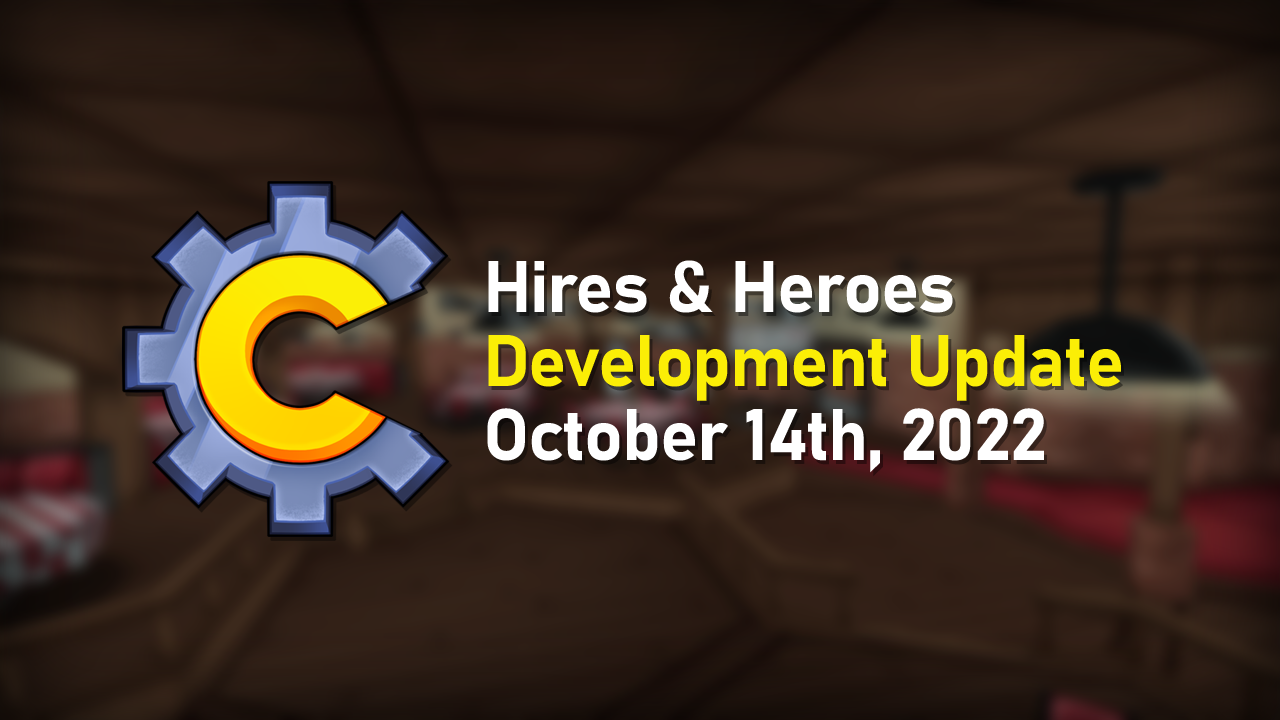 We've been hearing a few concerns from some folks over the lack of any clear update regarding the development of v1.3.0. We would like to go ahead and address some of these concerns head-on, and to get everyone in-the-loop over what is to come.

Let's clear this up immediately: we are not ready to announce a release date for the v1.3.0 update. This is likely disappointing, and we get it, but it's just not done yet! We are not going to announce a release date for an update that would arrive in an unplayable condition. That would be disrespectful to our players, especially those who had patiently been waiting for us over the past 2 years to provide the best content possible!

Does that mean we're never going to release v1.3.0? No, the update will definitely come out. Likely before December, at current pace, but it'll be ready when it's ready.
With that disclaimer out of the way, let's move a bit into the meat of what's been happening.

Here's the latest progress of where we are at with development:

In v1.3.0, we are introducing 16 new Manager bosses into the game. While the Litigation Team was 4 Manager bosses packed into a single battle, it was still, technically, only "one" unique boss fight. All 16 new Manager bosses will be in independent battles from one another.
The Litigation Team was one unique boss fight. We are adding sixteen more unique boss fights into v1.3.0. Not only that, but from our playtesting, several of these fights are more intense and difficult than the Litigation Team.
Again, because we need to highlight this: The v1.2.0 update added one new manager boss battle. The v1.3.0 update adds sixteen more.
Some people thought Count Erfit's fight from our April Toons event was very well-presented and fun to play. What people haven't yet realized is that Count Erfit hasbecome our baseline for how we want some of these fights to feel: we have been working hard to make each one well-presented and fun to play. It would be incredibly naive to suggest that us making sixteen new boss fights is "quantity over quality." In v1.3.0, you are going to get both quantity and quality.

It has been a common saying within the Crew that the community is completely unprepared for what v1.3.0 has to offer. We have pushed the game in new, innovative ways that makes the Litigator summoning 6 Cogs look like child's play.

Recently, we had picked up a couple of our Community Testers from our Partner QA sessions and invited them onto the Game Design team, allowing them to partake in our internal application process. Our new hires have been monumental in helping to put together balancing for the new bosses, giving great feedback for what works and what doesn’t.

As they were freshly picked from the community, we asked them if we were right in our assessment that the community is not ready for what's to come.

We'd like to take a minute to reveal a brand new game-wide mechanic being introduced in the v1.3.0 update. While we are extremely excited for this change and how it will keep the game feeling fresh for late-game players, it has the chance to be a point of contention within the community if we don't take some time out to explain our thought process with it.

We are adding a lot of brand new battle content into v1.3.0. However, due to the nature of Toontown's stat progression, most of the content has the potential to be extremely unsatisfying for people trying it out for the first time.

For example, in one of the above teasers, Bellringer is present on the streets of Daffodil Gardens, suggesting that any Toon can fight them. However, if a Toon who is currently in Daffodil Gardens attempts to fight the boss alongside three other maxed Toons, there simply will not be any kind of challenge: the maxed Toons can completely smite the boss in two turns. There's no challenge, no interest, no anything!

Dealing with this issue is something that our Game Design team has been thinking about for a while. There are two practical solutions to this:
This option allows Toons to maintain their state of progression throughout the game when fighting the boss. However, instead of having to balance the fight to one difficulty, the fight must now be playtested and balanced for Toons with varying stats. Suppose we added six boss tiers for all sixteen new bosses. Instead of having to balance sixteen separate battles, we now have to balance nearly a hundred. It also just does not work for street managers. This approach is impractical to implement for the scale of v1.3.0.
In v1.3.0, we are implementing Option #2 for the game, known as the Content Sync system.

Upon entering certain instances or battles with Content Sync, the game will:
1. Apply a soft cap onto your Laff
2. Apply restrictions on high-level Gags and boss rewards (such as IOUs and Unites)

Content Sync allows for overleveled toons to remain powerful when revisiting older content, but not allow that progression to completely trivialize certain encounters. For example: for bosses such as the V.P, maxed Toons with 150 Laff and maxed Gags will lose access to Level 7+ Gags. Their Laff will also be reduced to somewhere around 100, and the only boss reward that can be used are IOUs.

Note that Content Sync does not restrict the amount of Gag Tracks / Prestiges you have access to. Even for content designed for Toons that only have three Gag tracks (such as early-game Minibosses), end-game Toons will still be able to roll in with all 6 Gag Tracks.

Also, Content Sync does NOT force a hard cap on your Laff. Rather, it applies diminishing returns on Laff as your Laff surpasses the Laff cap. For example, if a battle has a Laff Cap of 60 Laff Points, but your Toon has 100 Laff Points, Content Sync will apply a Laff cap of 75. Another Toon with 120 Laff Points might receive a Laff cap of 80, 130 Laff points capped at 88, etc. This means earning more Laff Points still matters: Toons who are overleveled will still have an objective advantage over those who are at-level for the content!

This change might sound unpopular at first, but in reality, that is because Content Sync would not have been a good mechanic to introduce when there wasn't that much content to look forward to playing (i.e. before v1.3.0). With the amount of things to do in v1.3.0, Content Sync is going to allow you to re-experience so many new fun and exciting parts of the game, as intended.

We had a lot of debate within the Crew about whether we would even want to implement something like this, and in the end, everyone who was uncertain about Content Sync grew to become a big fan of it after playtesting it, especially for some of the new content that would be completely ruined without it.

For the v1.3.0 release, Content Sync will be mandatory. However, we do plan to add a setting to make it optional down the line for custom Groups, though it will likely not provide any rewards and be completely just for fun – this is the new way we intend for the game to be enjoyed.

We think Content Sync will help tremendously in keeping the game fresh for end-game players, allowing for everyone to enjoy what we've got in store regardless of progression. If you are still uncertain about Content Sync, we urge you to give it a shot once v1.3.0 lands!

We'd also like to announce a couple of other important things that will be happening with the release of v1.3.0.

First, we'll be having to clear mailboxes out again upon the release of v1.3.0 - make sure they are squeaky-clean, or you will lose all contents in the mailbox when the update lands. We'll push out another reminder for this as the update draws near.

Second, we will be disabling the option to make an Uber altogether for v1.3.0. There's a few reasons for this:

We realize both of these points are antithetical to the reason people enjoy playing as Ubers: having challenging battles add to the thrill. So, we'd also like to announce that we do have plans for Ubers down-the-line to help make them a lot more healthy for the game. We won't spill any information yet on how we plan to do this, but we are confident that they will be able to exist in Clash's future in a way that is less stigmatized than today. Toons who are currently Ubers will remain Ubers, but the option for creating new ones will be disabled for the release of v1.3.0.

As we update the game to introduce more features, we also need to update our system requirements.

Starting from v1.3.0, we will have a new set of system requirements:

The 1.3 update has not been tested against Windows 7 and 8.x and Corporate Clash will not provide technical support for players on these systems. We expect players of these systems to be able to launch v1.3.0 still, but this is not guaranteed in future releases.

We hope that this blogpost gives everyone a bit of insight into the current standings of development, along with some of the really exciting things to look forward to and the game-changing feature of Content Sync. The v1.3.0 update is, in every sense of the word, the biggest update that Toontown has ever seen. The foundations that we have been able to establish for v1.3.0 are going to have a massive impact on how the game evolves and flourishes into the future.