The v1.3.0 Update and The Future of Doodles 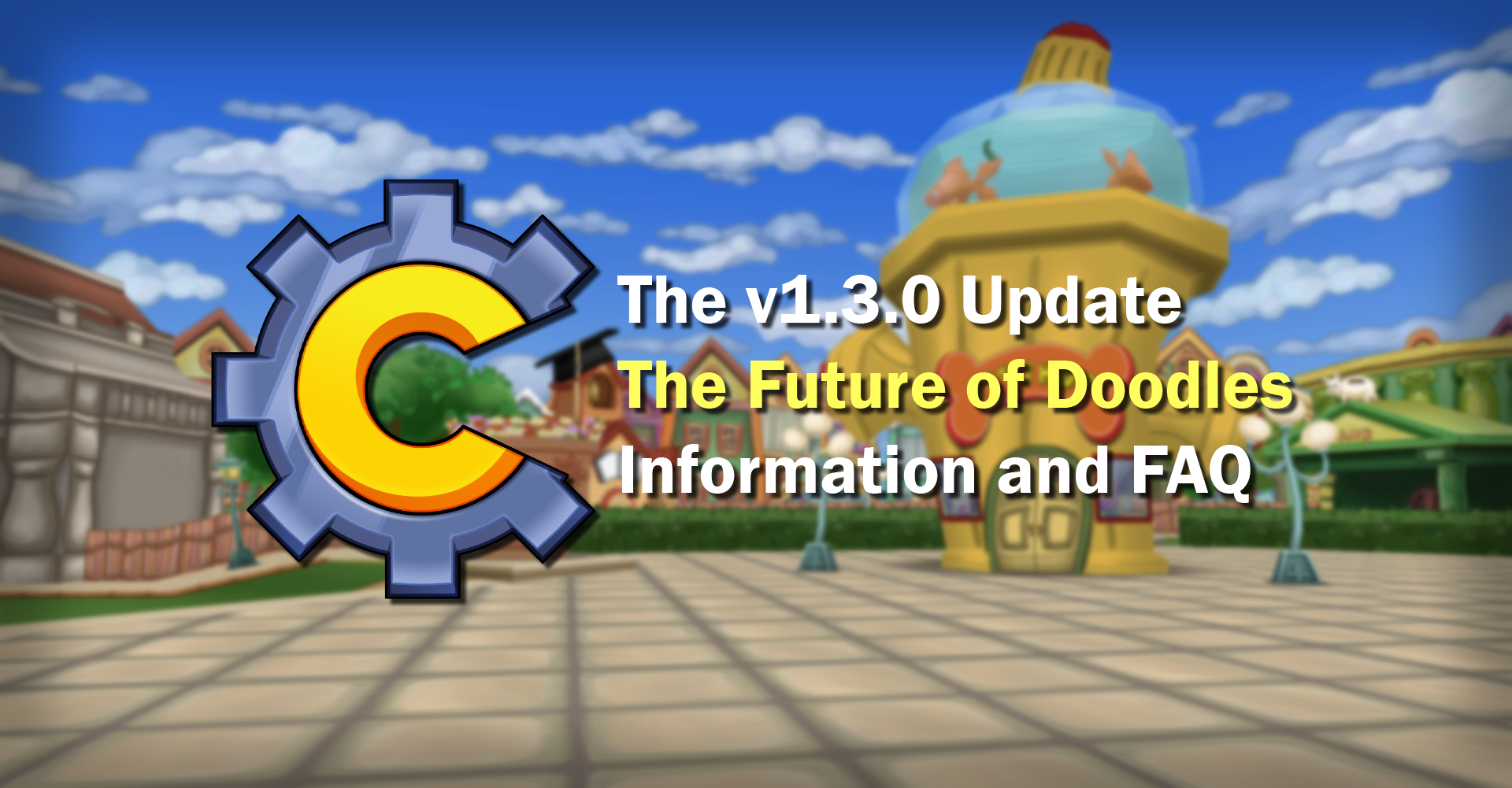 Hi Toons,
This is unfortunately not your usual v1.3 teaser post. Instead, we have an important announcement to make: We are (temporarily) removing Doodles from the game in the v1.3 update.
This blog post will explain why we've made this difficult decision and what this means for Corporate Clash going forward.

Where We Stand Today

Doodles have been around in Toontown Online since 2004, and in Corporate Clash since our launch in 2018. There were major issues in how the Doodles backend was designed in Toontown Online. which caused severe lag even back in the original game. However, the performance of the old Doodle code we had was sufficient for Corporate Clash in the state that it was in, and for the game's population that we had.
As we grew and more and more players owned Doodles, combined with our major updates to the battle system in v1.1, v1.2 and soon-to-be v1.3, Doodles became much more problematic for server stability, accounting for the majority of District Resets in recent months. They also caused performance issues and memory leaks (i.e. Doodles were not being cleaned up after they were used in the game, so they pile up and consume all of the memory on the server) whenever they were spawned in an Estate or in a battle.

District resets like this take tech resources away from content development, and the server instability Doodles bring would undermine the success of the v1.3.0 update, the biggest Toontown update the community has ever seen. After weighing our options (including doing nothing and partially removing some features to make Doodles more stable), we've decided that removing Doodles is the best action to take for the health and stability of the game.

How The Game Is Changing

We know Doodles are much loved by our community and as players of our own game, we are just as sad as you are having to take this step. We are making some adjustments to the game to ease the change a bit:
Besides Toon-up, Doodles were one of the main ways to heal Toons during battle, especially for certain scenarios (such as solos). Thankfully, upcoming Gag and SOS rebalances will help make healing more accessible in these cases where Doodles were the only option of healing. While the upcoming changes don't include direct replacements for Doodles, players will still have other options to heal themselves or do more damage in the v1.3 update.

In addition, we will be giving all players who had a Doodle at the time of v1.3 launch a 36-hour Increased Jellybean Rewards Booster. As Boosters in 1.3 elapse based on in-game time rather than real-life time, we hope this will give you plenty of time to earn back the Jellybeans spent on your Doodles once v1.3 launches.
Also, as a short-term fix to the District resets, we are releasing v1.2.8.2 today with a battle change: Doodle calling will no longer consider the Doodle's mood when calculating trick accuracy. In addition, all Doodles will now have a Neutral mood. This removes a major cause of server instability, and we hope to drastically reduce the number of district resets for now until v1.3 launch. As a side effect, we also expect Doodle trick accuracy to increase across the board, whether you have a maxed-out Doodle or not.

Where We Are Going Next

We know Doodles are a cornerstone of the Toontown Online experience and we're sad that we had to take the difficult choice of removing Doodles at this time. We are however 100% committed to bringing them back in a future update; in fact, we've already started planning out what a Doodle revamp would look like.
Just as with Clubs, we hope to bring back Doodles to Toontown with a much better design and to play a bigger role in the overall gameplay. We're sure they'll remain our cute (if not a bit doozy) cartoon companion when they return for good!

What is happening to Doodles in Corporate Clash's v1.3 update?
Due to server stability concerns caused by Doodles, we are temporarily removing Doodles from the game.
Why are you doing this?
We are removing Doodles because of legacy code causing major server instability, even before the v1.3.0 update. To ensure a smooth launch of the v1.3.0 update, as well as to improve player experience, we have decided to remove Doodles for the time being.
What will happen to my Doodle in-game?
After v1.3.0, they will no longer be accessible, meaning you will not be able to see them in Estates or call them for help during battle. We are not going to delete any Doodle data from our database for the time being, to allow for flexibility when we bring them back in a future update.
Are there any new mechanics in battle to replace Doodle tricks?
Yes. Upcoming Gag and SOS rebalances will help make healing more accessible in the cases where Doodles would have been ideal. They will not provide exactly the same type of healing as Doodles, but we expect players to have enough ways to heal themselves in v1.3.
Are there any compensations to Toons who spent a lot of Jellybeans for Doodles?

We will be giving all Toons who owned a Doodle prior to v1.3 launch a 36-hour Increased Jellybean Rewards Booster. As of v1.3, Boosters will be based on in-game time, meaning that players will be able to take advantage of the full 36 hours of boosted Jellybeans!
Do you plan on bringing back Doodles anytime soon?
Doodles are a cornerstone to Toontown Online's history and we have already started on brainstorming where we can take the Doodles system to next. While we don't have any news to share at this moment, rest assured that the team is 100% committed to bringing them back.