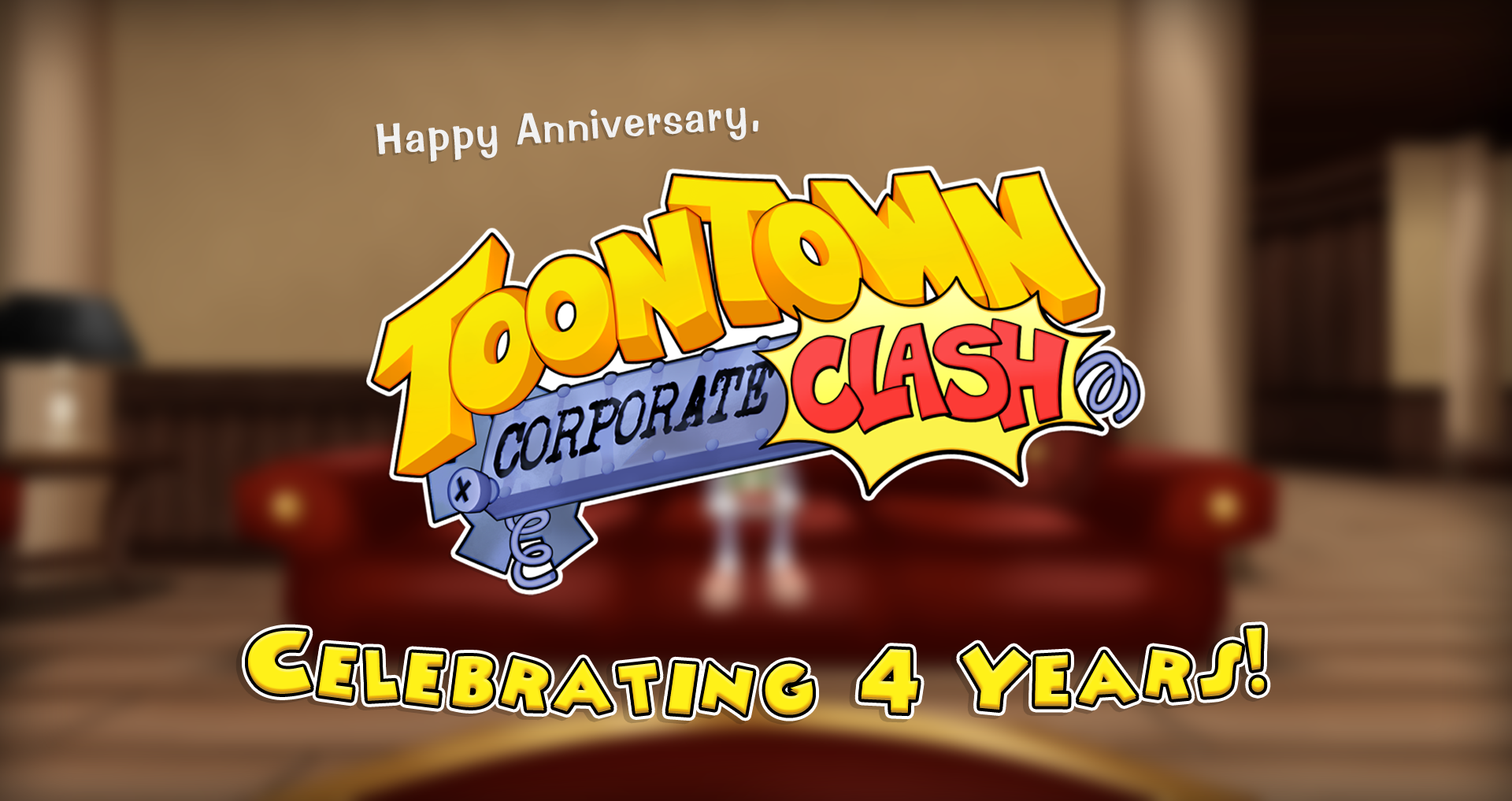 Happy anniversary, Toons! Four years ago today, Corporate Clash officially opened its doors to the world, and it’s been a wild ride ever since. In today’s blogpost, we wanted to take a look back at the past year of Corporate Clash, the present release of a brand new Podcast episode, and finally a peek at the mythical (and we assure you very real) v1.3.0 update, and some news on where we’re going in the future.

The Past Year
Toontown: Corporate Clash has had an exciting year of continuing to push boundaries for the game! In October of last year, we released the v1.2.5 update, which brought brand new social features like an overhauled racing system, brand new table games, and all new ways to express yourself through features like genderless clothing and toggleable eyelashes for all Toons. The v1.2.5 update also introduced seasonal goodies like the Bat-tle Pass and a wandering street version of Count Erclaim, leading hundreds of Toons to band together to take down the new miniboss.


As we continued through the holiday season, we released brand new marketing initiatives to expand the world of Toontown, like the first episode of our podcast  (more on that later…), an advertisement for HamBRRRgers , and revamping our Discord contests into quarterly contests hosted on all of our social media platforms, along with brand new prizes! Check out the winning entries to our Q1 (LINK) & Q2 (LINK) contests!


In April, we released our April Toons update, along with a new seasonal miniboss, Count Erfit, and a brand new Overclocked Find the Foreman minigame . The past year has also seen massive growth in our Partner Program, with us currently supporting over 20 Partners! Check out some of our partners’ highlights from the April Toons update here .
Our Moderation & Support teams have been doing awesome work as well! In 2022 alone, moderation has answered 406 modmails, including an additional 769 the anniversary onward last year, meaning a total of 1,175 modmail tickets have been responded to in the past year alone! Additionally, moderation has reviewed over 2,500 user reports as well!
Finally, in the past couple of months, we’ve been releasing brand new cog building music for each department, with our Boardbot OST video reaching over 11,000 views at time of writing! It’s awesome to see so much support for Corporate Clash after 4 years.

The Present Podcast
It’s been about 3 months since we released our last podcast, focusing on Atticus Wing. Many of our resources have been dedicated to that thing we’re talking about in the next section, so getting a new episode together has been difficult; however we’re excited to finally announce the release of a new episode, this time focusing on Thomas Saggs, the Chief Operating Officer of C.O.G.S., Inc. We hope to make these podcast episodes more frequent in the future and hope you enjoy this dive into the lore of the game!

Check out the brand new podcast episode at this link!

The Future Fun
So… The v1.3.0 Update. It’s been over a year since we released v1.2.0 which introduced the Overclocked C.L.O. among other goodies. Many of you have been wondering what exactly we’ve been working on. The team has been working day and night to make v1.3.0 a reality, and we’re getting very close to being able to talk about the update in-depth and finally show you all what we’ve been cooking for the past year. For now, we can discuss some brief details.
The v1.3.0 update consists of two major aspects. One side features a social overhaul, which seeks to re-evaluate and enrich all player interactions: from the chat system to meeting new Toons to brand new ways to work together towards common goals, and everything in between. This half of the update aims to fully and entirely resolve long-standing issues regarding progression during low population levels, and overall will drastically improve the player experience for new and veteran players. The second half of the update involves new major game content for all players, regardless of where they are in the taskline. And the third half (two? we meant three) involves going through and polishing up as many rough corners as possible, giving several existing features a brand new coat of paint. We’re not quite ready to discuss the specifics of the new major game content, and we’d be lying if we said we didn’t enjoy all the community speculation. However, we can say we’re very very excited for what the future holds for Toontown: Corporate Clash.

We hope you’ll bear with us as we press on with the development of v1.3.0, and we look forward to sharing more information with you soon (our v1.3.0 informational presentation comes late this month). Oh, and one last thing: along with the new major game content coming to v1.3.0 come brand new ways to earn laff points and an increase to the previous cap.
As of v1.3.0, the Corporate Clash Crew is proud to announce we’ll be officially raising the maximum laff to 150. So get your gags ready – they’re no cakewalk to earn, either!
Here’s to another great year of Toontown: Corporate Clash!
~ The Corporate Clash Crew